Diary of a D.I.Y. MFA - I published my first collection of poetry!

By Tamara J. Collins January 08, 2017
This is the 9th and final blog post in the series of Diary of a D.I.Y. MFA posts. These posts have spanned five years, from 2012, 2013, 2014, 2015, to 2016, making it more like a D.I.Y. Ph.D. than an MFA program!  In conclusion, here's what I got out of my D.I.Y. MFA; in addition to publishing my first collection of poetry, I met a lot of interesting writers from all different genres. I learned that as much as I enjoy reading fiction, I am not a fiction writer. I learned I can teach people the elements of writing good fiction and copy edit excerpts from short stories and novels for publication for setting, tone, character, plot, and ease of readability.  I learned that poetry heals hurting hearts and brings the community together.  I learned that the best personal essays are sparked by passion.  I learned that marketing writing is greatly different than literary writing. I may never be a national book award-winning author, but damn, I can write some powerful words and invoke emotio
Post a Comment
Read more

By Tamara J. Collins July 16, 2016
March 2016 I went to the book launch at 3s Artspace for The Penny Poet of Portsmouth and saw friends of Robert Dunn read his poems. I saw our beautiful Poet Laureate, Kate Leigh , do her Star Island reading at Portsmouth Book and Bar.        April 2016 I saw Monica Wood read at RiverRun Bookstore.  RiverRun Bookstore asked me to organize two poetry events for National Poetry Month . The featured readers included Mark Palos and RyanMcLellan at the first one, then Heidi Therrien and Lauren WB Vermette at the second one.  I saw our 8 th poet, Laureate John- Michael Albert, read from his new book, Portsmouth and Star Island Poems at PPLH. I attended the Newburyport Literary Festival . May 2016 I volunteered at the Seacoast Outright coffeehouse at RiverRun Bookstore.  I volunteered at the Shelley Girdner book launch for You Were That White Bird at RiverRun Bookstore.  I attended the Station NoteReading Series at 3s Artspace and saw poets Emilia Phillips , Duncan D. Camp
Post a Comment
Read more

By Tamara J. Collins January 10, 2016
July 2015 Began marketing for the first-ever Local Authors' Fair at The Portsmouth Public Library.  Last month was the final month for The Portsmouth Writers' Salon. It was a truly wonderful experience over the past two and a half years. My heart was happy to see all of our writers become published.   September 2015 I worked with Amy Ray and Laura Horwood-Benton  at the first-ever Local Authors' Fair at The Portsmouth Public Library.  About this Blog Since graduating from college, I have been a full-time freelance writer. I've created my own D.I.Y. MFA program by attending as many literary events as possible in my community. My goal is to attend a diverse array of events and to keep an open mind and an open heart.  This blogger account is where I log my literary events attended over the past six months.  Check out my author and freelance writing page. Please visit:  tamarajcollins.com
Post a Comment
Read more

Diary of a D.I.Y. MFA - Charles, Dagan, Michael, and Tammi

By Tamara J. Collins July 19, 2015
January 2015 I wrote a review of The Poet's Tale, Lady Wentworth , edited by Tammi J. Truax for publication.   April 2015 I met with Amy Ray and Laura Horwood-Benton   to help plan the Local Authors' Fair at the Portsmouth Public Library .  May 2015 I attended Long Story Short to see Dagan Migirditch (Portsmouth Writers Salon Member), Michael Boulerice (author of The Adventures of KungFu Mike and the Magic Sunglasses), and Charles McMahon (author of Legendary Locals of Portsmouth) perform.  June 2015 I was invited to read some poems on Writers in the Round on June 15th.  About this Blog Since graduating from college, I have been a full-time freelance writer. I've created my own D.I.Y. MFA program by attending as many literary events as possible in my community. My goal is to attend a diverse array of events and to keep an open mind and an open heart.  This blogger account is where I log my literary events attended over the past six months.  Check out my author
Post a Comment
Read more 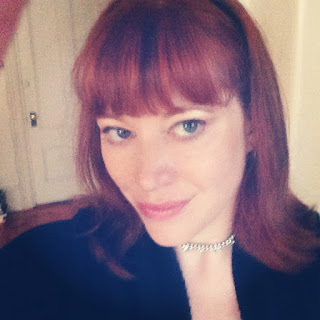 Me  09.10.2014 July 2014  I was invited to  teach the Teen Writers' Workshop at the Lane Memorial Library in Hampton, NH, which I taught in Fall 2014.  August 2014 I wrote a letter to the editor in support of Keep Portsmouth Loud, which was published. I submitted an essay to the Paris Review and received an encouraging rejection letter.  September 2014 I met former City of Portsmouth Mayor  Steve Marchand  for coffee and discussed Keep Portsmouth LOUD and other community ideas. October 2014 I submitted essays and poems to Granta , Tin House ,   AGNI , The SUN , and Real Simple. November 2014 I was a featured reader at Beat Poetry Night at the Press Room. December 2014 The rejection letters from the essays and poems submitted to Granta , Tin House ,  AGNI , The SUN  appeared in my mailbox.    About this Blog Since graduating from college, I have been a full-time freelance writer. I've created my own D.I.Y. MFA program by attending as many literary events as
Post a Comment
Read more 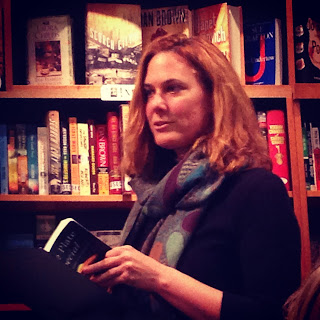 January 2014 I kept the Portsmouth Writers Salon going. I discontinued the Essays Book Group.  I continued volunteering at Sheafe Street Books .  February 2014 I saw Jackson Warfield Read and BCAP perform at the Red Door.  I sat with John-Michael Albert and John Simon .  I attended Jason Laundry 's photos & essays at NHIA.   March 2014 I read my first poem aloud at the Portsmouth Poet Laureate Program Poetry Hoot .  April 2014 I saw Leslie Jamison read from The Empathy Exams at RiverRun Bookstore .  I attended Pat Parnell 's 90 th Birthday Party at the Wiggin Memorial Library .  I was invited to participate in the Portsmouth Love Wall at Prescott Park. May 2014 I saw Elizabeth McCraken (5/20/14) and Kate Christensen (5/24/14) speak at RiverRun Bookstore.  I attended the Provence Prize reading hosted by Adam Irish at Portsmouth Book and Bar, in which two members of Portsmouth Writers Salon came in first and second place.  I saw Adelle Waldman read at
Post a Comment
Read more

Diary of a D.I.Y. MFA - Nicholsan and Paul 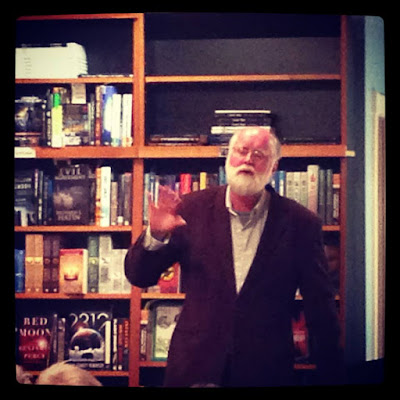 Nicholson Baker at RiverRun Bookstore July 2013 I started volunteering at Sheafe Street Books on the weekends. I also started running an Essays Book Group that meets at Portsmouth Book and Bar on the first Tuesday of the month. The Essays Book Group is open to all, and if you email me at TamaraJCollins (at) gmail (dot) com, I'll send you the list of who we are reading, what we are discussing, and when we are meeting.  August 2013 I started working with Tom D'Evelyn , editor & writing coach. I wasn't seeking a writing coach, but he approached me about it, and I agreed to give it a go.  September 2013 I saw Paul Harding speak at RiverRun Bookstore . October 2013 I attended the  NEIBA conference   in Providence, RI. November 2013 I saw Nicholson Baker speak at RiverRun Bookstore.  December 2013 I was asked by Larry Clow from The Wire to provide some holiday book giving recommendations.  I was asked by Toby Hatchett from the Portsmouth Herald to pro
Post a Comment
Read more
More posts